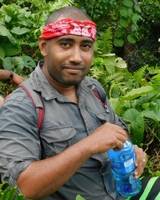 Research on the abiotic and biotic factors affecting fish in both large rivers and wadable streams in Fiji is scarce. This project analyses several mechanisms affecting the abundance, diversity and community structure of fish in wadable streams of Nakorotubu district, on the island of Viti Levu, Fiji.

Three streams were sampled during the wet and dry seasons and categorised into lower, mid and upper reach streams. At each reach there were five replicate stations and within each station water quality and habitat data were collected. Fish were surveyed using a combination of electrofishing and beach seine. Data were analysed using both univariate and multivariate statistical methods to elucidate factors affecting fish communities.

A total of 677 fish were caught through electrofishing; 27 species of fish from 9 families were collected representing 16% of the known freshwater

and brackish water fish fauna of Fiji. Spatial variation in fish assemblages were identified with a total of 11 species (46% of total) confined to the lower reaches of the three streams surveyed. Temporal changes in fish community structure across wet and dry season were noticeable for the three streams sampled.

The total abundance and species richness of fishes in streams were significantly affected by position in the catchment, with lower reaches having the highest diversity and abundance and decreases moving upstream. Water quality data were correlated to the total abundance of fish per station and total species richness per station using Spearman’s Rho test. Overall, parameters such as conductivity, turbidity and pH had significant correlations (p<0.05) with the fish assemblages.  Habitat and micro-habitat variables were tested and it was found that the volume of water in a stream is a highly significant factor regulating fish communities across the three streams. The variation in abundance of the four important freshwater food fishes, Kuhlia rupestris, Kuhlia marginata, Eleotris fusca, and Giuris margaritacea of Fiji were best explained by the volume gradient in the analysis.

The results of this study suggest that stream flow and water quality are important for freshwater fish biodiversity.  In Fiji these parameters are being affected by anthropogenic pressures. A number of watershed management projects have started in Fiji to address these pressures. This research also provided a baseline for stream and fish health in Nakorotubu, Ra and it is hoped that these will improve through the watershed management efforts.