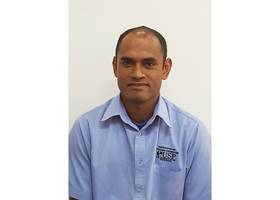 Scientific research plays a crucial role in the development of seaweed harvesting, cultivation, processing and utilization. There is a clear and ongoing need for research and development to enable an economically and environmentally sustainable seaweed industry in the Pacific, including Fiji. The major focus of this study was to assess the growth and morphology of cultured Caulerpa species in the field and to determine the effect of key environmental parameters (temperature, light intensity and salinity) on its growth in the laboratory.

The first research aspect was field experiment which focused on assessing the growth and morphology of Caulerpa species at five different sites (Veivatuloa, Muaivusu, Namuaimada, Mana and Gunu). Six single trays with two treatments (three trays with 7 kilograms of rubble as a substrate and three without rubble) were placed in five sites. Biomass fresh weight and biomass attributes (frond length, width and grape size) of Caulerpa spp. were assessed based on site (five sites), substrate (with and without rubble) and growth position (protruding above, within or below tray). Overall, there was poor growth of Caulerpa spp. after 9 weeks. However, there was a significant difference in the biomass fresh weight of Caulerpa spp. between sites, whereby growth at Mana was significantly higher than that at other sites. Tray growth position in the water column (above, middle or below tray position) had no effect on Caulerpa spp. biomass weight. There was no overall statistical difference of biomass weight detected between any of the three factors. However, there was an interaction between site and substrate, driven by an effect of no rubble (1.12 kg ± 0.1 SE) on biomass weight. At Mana, it was significantly higher than that with rubble (0.84 kg ± 0.01 SE). Results showed that there were significant differences between biomass attributes and sites. Both frond width and grape size were also significantly higher at Mana than other sites (Frond width – Mana: 0.86

cm ± 0.02 SE, Gunu: 0.65 cm ±0.02 SE), (Grape size – Mana: 0.24 cm ± 0.004 SE, Gunu: 0.21 cm ± 0.005 SE). Furthermore, frond length was greater at Mana and Gunu than at Muaivusu. The frond length and width results were strongest on biomass culture in the bottom position of tray. There was a trend for larger grape size on the above position (0.25 cm ± 0.009 SE versus 0.24 cm ± 0.009 SE for below position), however this was not significantly different. There was no significant differences between treatments in any of the main effects, both frond length and grape size. Differences only existed with frond width when compared between substrate treatments. For the environmental variables monitored (temperature, light intensity and salinity), temperature appeared to have the strongest association with the growth of Caulerpa spp. in the field.

key environmental parameters (temperature, light intensity and salinity) on Caulerpa spp. growth in the laboratory. The study was conducted at USP Seawater Wet Laboratory from June to August 2015. Caulerpa spp. seedlings were collected from Volivoli in Rakiraki, Western Division. There were five experimental trials carried out consecutively for duration of ten days of culture. In each trial, growth was investigated at temperatures of 25, 30 and 35°C, light intensities of 1000, 10 000 and 20 000lx and salinities of 29, 32 and 35 ppt. Results revealed that Caulerpa spp. growth was best at the medium temperature of 30°C, the medium light intensity of 10 000lx and with a salinity range of 29-35 ppt.

This study highlights that the growth and morphological variation of Caulerpa spp. are highly variable. The empirical and monitoring data presented indicates that multiple environmental and biological factors will influence the domestication and aquaculture of Caulerpa in Fiji, primarily temperature and substrate for the attachment of individuals. Any future research should firstly focus on understanding the genetic variation of Caulerpa spp. at the different sites, as the environmental factors evaluated in the present study could not explain the majority of the variation observed in the system, which could be due to presence of more than one species of different strains of the one species.