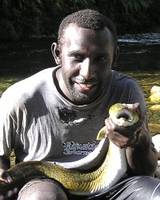 One of the poorly known aspects of the biodiversity of the Fijian Islands is the biodiversity of freshwater fauna. Data collected from this study were used to compile a checklist of Fijian freshwater and estuarine fish, determine the physical habitat factors influencing richness and abundance and identify biogeographic patterns including fish communities and assemblages found in different regions and habitat.

The “Inter Quartile Range” and multiple regression analyses were used to analyse the data collected from this survey. “Inter Quartile Range” analysis was used to describe how common were the fish species caught from the different sites collected during this survey, other collections and the combine collections. Multiple regression analyses were used to examine the relationships between physical habitat characteristics and freshwater fish species richness and abundance.

SPSS Version 11.5 for Windows was used for all analyses and α was set at 0.05 for all analyses. Anguilla marmorata (Anguillidae) was the most common species collected during this survey. The common species after combining all the collections are Anguilla marmorata (Anguillidae), and Kuhlia rupestris (Kuhliidae). The moderate to occasionally common and the least common fish species of the combined collections are in Appendix 6.

Fiji has the Environment Management Act and is signatory to international conventions (CITES, CBD, RAMSAR) that have legislation to protect Fiji’s biodiversity. Therefore, findings from this survey should help decision makers to recognize the importance of the flora and fauna of the rivers, streams, creeks and lakes, and protect them. Once care is given to the aquatic systems, it will help take care of the whole ecosystem.