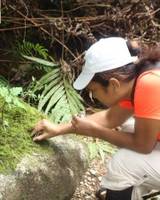 Long-horn beetles (Family: Cerambycidae) in Fiji includes 124 described species within 45 genera of which 110 (88.7%) are considered endemic. Cerambycids serve as pollinators and decomposers and are considered important providers of ecological services. The family also contains an iconic Fijian species – the giant long-horned beetle Xixuthrus heros Heer 1868, one of the largest beetles in the world and a cultural totem for the chiefly clan of the Namosi Province.

Despite their conservation value through endemism, ecological significance and cultural importance, little scientific research has been conducted on their taxonomy or ecology. This data deficiency hampers the development and implementation of conservation measures such as formal status assessment via the IUCN Red List and protection via the Convention on International Trade in Endangered Species (CITES) or Fiji’s Endangered and Protected Species (EPS) Act.

This study therefore focuses on the taxonomy and ecology of Fijian Cerambycidae and includes:

1) a taxonomic revision of the most widespread cerambycid genus Ceresium;

3) evaluation of the biogeography of cerambycids combining information currently available from this work and previous studies;

Molecular analyses to determine phylogenetic relationships were also attempted but were not successful due to problems related to DNA extraction.

For the first time in Fiji, standardized timber baiting experiments were conducted to assess beetle-host tree relationships with twelve commonly found native tree species. The study recorded the trees Garcinia myrtifolia and Serianthes melanesica as the most preferred hosts in terms of abundance of emerging individuals. The emergence of most cerambycid species (i.e. species richness) was evident from the host species Ficus vitiensis and Ficus fulvopilosa.

The biogeography study focused on ten selected Fijian islands from which substantial species records were available. Multivariate cluster analyses revealed similar community assemblages for the islands of Vanua Levu, Taveuni, Gau, Ovalau, Kadavu and Koro whilst the islands from the Lau group (Moala, Vatoa and Lakeba) were relatively dissimilar. The island of Viti Levu was the most “distinct” island in terms of its cerambycid assemblage with 23 species recorded from this study belonging to 16 genera, probably attributable to it being the oldest, largest, highest and most diverse island within the Fijian archipelago. Results confirmed that species composition on small islands neighboring relatively larger ones typically had a subset or nested species assemblage. This was evident for both islands neighboring the “mainland” island of Viti Levu and the island of Taveuni which is proximal to Fiji’s second largest island Vanua Levu.

The use of Species Distribution Modelling (SDM) for the genus Xixuthrus was also the first study of its kind in Fiji. The genus Xixuthrus is significant as Fiji is known to be home to the second largest beetle, X. heros globally. X. heros is endemic to Fiji and considered to be rare and possibly endangered. Therefore, the need to gather data regarding distributions patterns for X. heros is crutial to any conservation efforts required. SDM for the genus Xixuthrus was particularly useful because previous records of the genus were used to estimate likely geographical range, thus maximizing the conservation value of such information. The models were used to identify suitable habitat areas under both current and future climatic conditions. Results from this analysis were then used to identify sites of priority for conservation action in Fiji which were focused on the island of Viti Levu.

Overall, this study has contributed significantly to knowledge of the taxonomy and ecology of Fijian members of the beetle Family Cerambycidae. This knowledge and data can now support the making of conservation management decision within Fiji via government policy developments and contributions to the National Biodiversity Strategy and Action Plan (NBSAP) process and eventually to the Conservation of vii Biological Diversity (CBD) reporting requirements. In general, there is a significant need for further resources being allocated to studies related to Fijian taxa, and this study highlights the paucity of information that was available for the Cerambycidae prior to this study. Funding directed from government and NGOs to build local scientific capacity and expertise could support the delivery of such key information. Programmes that provide information to local communities and stakeholder regarding the value of biodiversity would also be valuable. Such knowledge would provide a platform for informed decision-making for the conservation of Fiji’s unique flora and fauna. Local experts should have the capacity to conduct scientific studies, publish and be able to generate appropriate data to advise stakeholders regarding conservation management plans and policies.