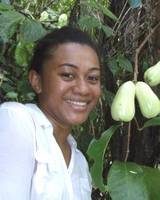 The cane toad, Bufo marinus, was introduced to the Fiji Islands by the Fiji Agriculture Department in 1936 as a biological control agent. Although extirpations of the endemic Fiji Ground Frog (FGF) have been attributed to the introduced small Indian mongoose (Herpestes javanicus eradication project, therefore the results of this study will provide valuable baseline information on areas to target for cane toad removal and ) the cane toad (CT) has also recently been proposed as a potential agent of decline.

To date however, no studies have been conducted to systematically determine the nature of relationship between the FGF and CTs. Consequently, the aims of this study were to provide baseline data on the spatial distribution and habitat preferences of the two species on Viwa Island (60 hectares), Tailevu. Viwa Island was divided up into 60 transects which were randomly surveyed over a one week period each month from June 2004 to February 2005.

These surveys provided spatial distribution and abundance data for both species in relation to habitat. The two study species were both found to be widely distributed on Viwa Island but did not always occur in the same localities. This pattern can be attributed to the differences in the response of each species to human disturbance. Gravid female Fiji ground frogs and calling individuals were found every month; however, juveniles were only recorded in May to June, suggesting that January/February are the peak egg-laying months.

The biggest threat to the endemic ground frogs on Viwa Island is the destructive slash and burn of agricultiural areas close to potential frog –breeding sites. Viwa Island has been proposed as the site of the world’s first CTFiji ground frog conservation.