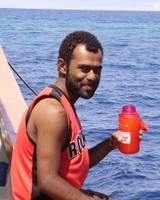 Metroxylon vitiense is an endemic palm currently listed as Vulnerable by IUCN (International Union for the Conservation of Nature and Natural Resources). Once widespread throughout the main island of Viti Levu, Fiji, it is now restricted to seven populations on the southeastern part of Viti Levu. The aims of this study were to determine the current distribution of M. vitiense, determine the harvesting impacts on population structure, conduct ethnobotanical studies on the use of M. vitiense by local communities, and develop a conservation management plan for the sustainable use of M. vitiense.

A detailed literature survey was used to determine the location of all the historical populations of M. vitiense on SE Viti Levu. All these sites were surveyed and current distribution maps were drawn using COREL DRAW 12 mapping software. Four populations were identified: Galoa, Culanuku, Pacific Harbor & Wainiyabia. Areas with varying harvesting intensities (high and low) were located in each population. A total of 14 subplots were placed in each population (seven each in high and low harvesting regimes). Heights of all palms found in a 10 x 10 m sub-plot were classified into three categories: seedling, juvenile or adult. A detailed questionnaire was conducted on the resource owners about their use of M. vitiense.

In addition, the harvesting of leaves for thatching and the felling of adult trees for palm heart, opens up gaps which facilitates the introduction of weeds such as Mikania macrantha, Annona glabra and Merremia peltata which obstruct growth of M. vitiense by smothering, competing for space and nutrients and disrupting the microclimate.

The current harvesting rates of M. vitiense are unsustainable as there is no replanting. The harvesting of M.vitiense for thatching and palm heart in SE Viti Levu has both direct and indirect negative effects on the population structure.

Re-assessment of the conservation status of the sago palm proposed that species should be listed as Endangered (EN A4+B2b) based on a reduction of the natural population distribution and size by almost 50% by unsustainable harvesting for thatches and palm-heart.