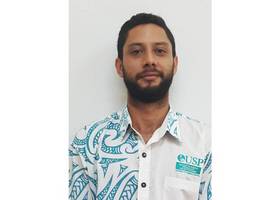 Pigmented bacteria have been shown to produce an array of secondary metabolites with a wide range of applications. From pharmaceuticals to cosmetics to industrial and to food additives, a multitude of compounds from bacterial sources has contributed to the extension of human life. The present work focuses on the assessment of the secondary metabolites produced by a red- pigmented marine bacterial strain identified as Pseudoalteromonas rubra from 16s rRNA gene sequencing and its potential applications in the pharmaceutical industry. The red-pigmented bacterium was isolated from an alga collected off the coast of Uluibau Village in Moturiki Island, Fiji and was cultured in a yeast-peptone medium for five days. Secondary metabolites were extracted using ethyl acetate and tested against Bacillus sp. strain CNY977 following the disc diffusion method. Chromatographic techniques such as vacuum liquid chromatography, solvent-solvent partitioning, Combi-Flash column chromatography, size exclusion chromatography, preparative thin layer chromatography and high-pressure liquid chromatography were administered. Twelve compounds were putatively identified from the UV and LCMS analysis of the crude extract and purified fractions. Spectroscopic data from 1H, 13C, 1H-1H COSY, HSQC and HMBC were used to elucidate the structure of the pure compound (Pseudoalteromone A).